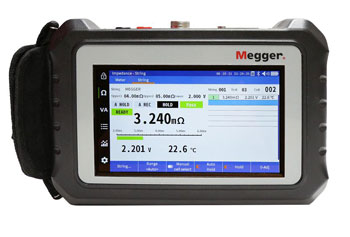 The BITE5 will test lead acid batteries, NiCD batteries as well as lithium-ion batteries. It will measure and record battery voltage, impedance, and temperature. The recorded data can be trended on the unit’s touch screen. View the trended data of each test or trend the data of each cell. Set pass, warning, and fail limits for voltage and impedance. Record the ripple voltage, ripple current, and float current and transfer the recorded data via USB or via an SD card to the Power DB software, then create custom reports and automated analysis.

The BITE5 can measure impedances on cells up to 200Vdc. Save time by measuring entire banks of cells instead individual cells. Measure lithium ion battery packs.